The fetchpriority HTML attribute is starting to have enough browser support for usage in production environments. If a browser doesn't support it, it simply does not get used. There is no downside to using it, unless you use it wrong. This is an in-depth look into using it with <img> and <picture> elements via different use case perspectives.

And here's the same example with low fetch priority:

Do note that the loading attribute usage with the fetchpriority one might not be as black and white as the examples might show, and the next use case examples should give you an idea of why.

This use case is the most obvious: use the high priority to images that are above the fold. This includes images such as hero image and header logo, which are both most likely above the fold. You should combine the high fetchpriority with loading="eager" attribute, making sure that browser will not try lazy loading it. This will speed up loading the first paint, giving you better user experience, and better Largest Contentful Paint and First Contentful Paint scores on Lighthouse.

Let's have a quick look at this illustration of an image carousel/slider design with a large slider image and several smaller thumbnails under it: 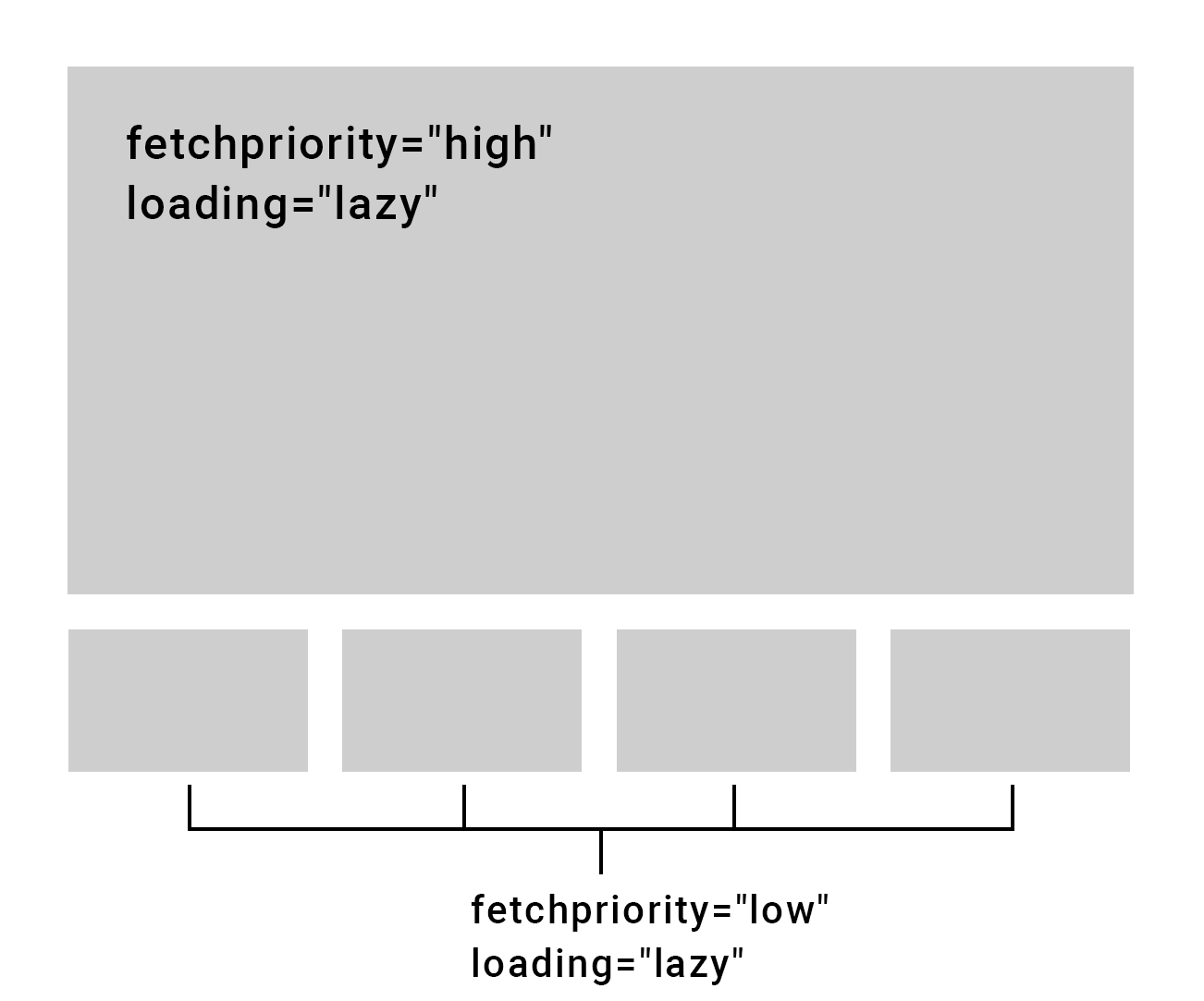 As you can see, all of the images have loading="lazy", making the images get lazy loaded, as this section is under the first fold. However the largest image still has fetchpriority="high", and small thumbnails have fetchpriority="low". Why?

The slider's large images after the first one can be set as fetchpriority="auto" or with no fetchpriority attribute at all, as long as they also have loading="lazy".

If you have a button or a small thumbnail that upon clicking should open a large popup image, it should be lazy loaded but still prioritized upon loading. Here the way you load the image will change what combination of loading and priority you should use.

If the image is part of the HTML DOM already and you're just hiding it with CSS, give it loading="lazy" to prevent it being loaded before appearing on viewport (before user interaction), but also give it fetchpriority="high" so that once it appears on the viewport upon a click, it loads with highest priority.

But if the popup image loads via JS logic, for an example useState via React, you can freely give it both loading="eager" and fetchpriority="high" to maximize it's quick loading time. It won't appear on the DOM without the user action happening, which means that the eager loading will not make it be loaded instantly on page load, it will only be loaded when it truly is part of the DOM.

Using low priority, even when above the fold

When to not give fetchpriority attribute at all

It is not recommended to specify the fetchpriority attribute at all for "regular" images, such as images on an article or regular "image next to text" sections on a layout. Just let lazy loading do its job with loading="lazy" and let browsers load them with the default fetchpriority. The fetchpriority property was made to solve more complicated loading solutions and not regular image layouts.

Last words on combining fetchpriority with the loading attribute

The fetchpriority is just a recommendation for the browser, giving high priority does not force browser to load images and giving low priority won't block loading them. It just gives additional context on image loading, and specifying loading="eager" and loading="lazy" will just become more important for solving browser's question "when should I start loading this?". If you specify the fetchpriority, but not the loading attribute, even low priority images under the fold can start slowing down the above the fold image loading, as depending on your browser they might not get lazy loaded by default.

This article has been all about using the fetchpriority with images, but it can also be used for things outside images too, for an example scripts, iframes and more. You can have further reading of its non-image capabilities with these articles: